Grillin’ Pablo is a time management game from icannhas Inc. that lets players handle their own street food business.

Most Filipinos love cheap thrills. They are known for finding the best steal and happiness in life through simple stuff that doesn’t exactly scream lavish or OTT.

This simple happiness is reflected in icannhas Inc.’s new iOS application called . Grillin Pablo depicts the traditional Filipino lifestyle, and even features some grilled and exotic Filipino street foods like the “isaw” (grilled chicken or pig intestine), “betamax”, gotto, and fish balls. In the game, the protagonist is the player.

Grillin’ Pablo follows the story of a kid (you!) from Sunnyville who was mortified by a childhood rival named Pablo. A few years after the embarrassing humiliation, Pablo has already become a street vendor. The protagonist decides to go against his nemesis and prove him wrong. You settle the score with Pablo by establishing your own street food kiosk and by gaining customer loyalty and money. You’ll get your revenge on Pablo as you acquire customers, profit, and eventually put him on the brink of bankruptcy.

Grillin’ Pablo is a time management game from icannhas Inc. that lets players handle their own street food business efficiently and quickly. The objective of the game is to serve the customers their orders of famous Filipino chows from grilled street foods like isaw and fish balls to their sweet and cheap “gulaman”—a concoction of sweet syrup and diced gelatin.

The setting of Grillin’ Pablo takes place in various establishments of Sunnyville. For beginners, you’ll have to sell the Filipino street chows at Schmell Academy where you will encounter customers such as students and professors. You will start grilling isaw and make sure that the customers’ orders are sufficed and served within the allotted time. The coins that you will get as payment will serve as your profit that you can use for buying another product or equipment. The value of the coins varies depending on the items that you have served.

To serve the customer’s order, the player needs to drag the items to the griller and settle the carton where the food will be placed.  The player can figure out the customers’ orders through the food that is reflected in the thought bubble.  The player needs to be careful when grilling the street foods because they might get burned. Burnt foods can’t be sold and that will result to a loss of profit.

Before you start each game, there is a goal that needs to be accomplished for the entire level. When you surpass the goal, you get bonus points and you can even gain trophies like the Fast Server trophy. If you fail to meet or beat the goal in each level, you’ll have to restart the game.

As the game advances, you’ll unlock different characters and even some levels. You can buy upgrades for your kiosk as you collect more coins from each level. Also, you’ll get a chance to purchase another item for selling when you accumulate more coins. Some of these items hold higher coin value than the grilled street foods.

Beware of the roaming thief in the area because he will take the coins that the customers left if you failed to collect them. 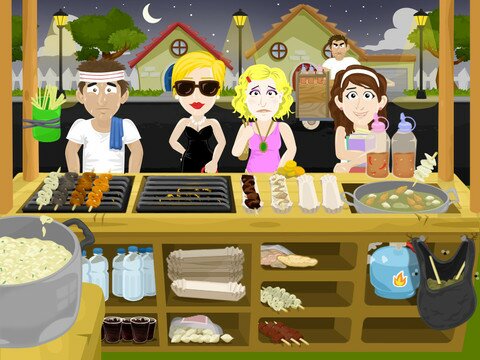 Grillin’ Pablo, despite its stale and recognized gameplay, still holds a diverting element that will keep players consumed for an hour or two. This is a pleasant casual game that may or may not work on its developer’s benefit. For one, this is a really entertaining game and the illustrations are very storybook-amazing. It goes from being plain animated to being amazingly animated as the game progresses. The tone of the music as you play the game is fine since this style has been the typical scoring format for time management games.

I love this game but there is something that is bothering me about the game as a whole. While I admire the fact that this fun game was developed by Filipino developers, it still doesn’t make sense to me why the voice over needs to be in Filipino language when the surroundings and the names of the establishments are all screaming “We are aiming for an international market!”

Well, yeah, what do I know about the developer’s intentions? The app is very Filipino and very proud in its dedication to give a shout out to their cool and laid-back lifestyle. It’s just that, in my honest opinion, if you are aiming for a worldwide audience, then you should also be able to cater to what the worldwide audience demands. I don’t think an app developer developed a certain app with the perception like “We are aiming for this app to be famous solely in our country” in mind. No, I don’t think so. Maybe in future updates, the developers can make the users choose between English and a Tagalog voice over. I really admire the very nice Filipino touch that the app has. Just some minor updates and this game will really, really excel.

Oh, and just so you know, because many of my occasional backpacking trips happen in the Philippines, dare I say that their “isaw” is definitely the best! I call dibs on that!

I'm the weird cat in the attic. A non-conformist. A beatnik.

Cancer Coach: An App for Your Treasure Chest

The Magnificent Travelling Palace: A 3D Storybook Worth a Download