One of the best kiddie movies that made me cry non-stop was Toy Story 3. I dig the movie firstly because of the idea that that beloved trilogy has finally find its closure, and secondly because of the idea of the “closure” itself. Not to mention that the last movie of the Toy Story franchise was so well-executed, well-written, and well-directed that it became a definite shoo-in for Oscar gold. Who could ever forget Woody muttering “So long, buddy” to Andy? And what about hearing Lotso’s back story and tearing up at the thought that he was somewhat taken for granted?

Essentially, I think the Toy Story movies are a metaphor for life. You win some, and you will certainly lose some. Also, the concept that toys need proper attention and caring struck me hard because as a kid, I was a hoarder. Needless to say, that movie woke up the marshmallow in me because I can easily relate to it. Even boys cried hard at that movie. 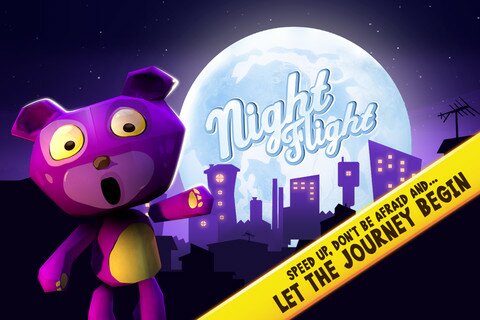 So when I saw this app called , I was instantly reminded of Toy Story. Night Flight tells the story of a purple bear (how very, aptly Lotso) who woke up in the middle of a murky and unfriendly toy factory that was resided by antsy stuffed toys and animals. When the purple bear found an accessible toy bi-plane, he rode it and flew his way outside of the gloomy toy factory and towards liberty. With an impressive app design and dark, atmospheric visual graphics, players can easily get a sense why this app is fittingly called Night Flight.

Night Flight ($0.99) is a basic gliding game from first time iOS app developer, Rebel Twins. I think it’s a smart move for Rebel Twins that for their first app, they chose to develop a kiddie and adult friendly app that presents a simple game play with a nice story. The basic idea of Night Flight is to get the purple bear out of the toy factory in all its 32 levels. Because the bear is trapped inside the toy factory, the player needs to maneuver the aircraft that serves as the bear’s only ticket to freedom. The gist is to keep the bear alive and safe as he collects the stars in each level which will advance his ranking. Also, the bear needs to look for the remote control that serves as an exit door to move you to the next level. While the gameplay of Night Flight sounds simple and familiar, the difficulties lie in the execution. Gamers need to master the aircraft’s navigation because this game is mostly about control, and how well you can dodge the missiles and explosions.

Players need to collect stars as he glides inside the different levels of the toy factory. There are 32 levels in Night Flight. In each level, you need to recover as many stars as possible while also looking for the remote control that holds the exit to the next level. It is not hard to get stars as the aircraft glides along because the stars are instantly attracted to it. There are power-ups in the game that can help players collect stars faster and capably like the magnets and rocket boosters. The stars that the player collects also keeps your aircraft’s fuel in tiptop shapes, making the aircraft go faster and smoother.

There are also several threats in the game that can hinder you from finding the exit like the terrifying enemies that are ready to bring down the aircraft at first sight, and missiles that will blast your plane leaving your purple bear a chopped liver. Some obstacles in the game require just a slight amount of force because you never know when you will accidentally bump into things. Obstacles that involve explosions will leave damage to your aircraft and you will find yourself restarting that level again. So again, the key is really in control and proper navigation.

The controls will take players a bit of a time before fully mastering it. When you touch the left side of the screen, your aircraft will fly in the left or north direction making the plane do a counter-clockwise movement. Touching the right side of the screen will do the opposite as it makes the aircraft fly in the right and south direction. The changes in directions are not instantaneous that’s why the players must make the adjustments on when to move into the proper track.

The problem in the game is really in the gearshifts because it takes a while getting used to stabilize the plane. But even though Night Flight requires a bit of effort from gamers, the exhilarating feeling that you will experience each time you field a missile or a haunting stuffed animal is really exciting. The thought about being claustrophobic inside a murky toy factory will always be with you in each level—which is also a great thing because it drives you to fly more towards the exit. In 99 cents, you’ll experience epic sound effects and imaginative visual illustrations.

Because, yeah, there is “the dream.” There is the dream that you are trapped in the confines of a hazy toy factory and your only escape is the toy plane that is so unsure of its own safety it should have a sticker on its side saying “Do or Die”.

The innocent darkness of the game makes you feel like you’re trapped inside a murky playhouse that you only dreamt of having when you were a kid. It also helps that the little teddy bear is pretty much like a helpless cat that you wanted to salvage in the dread of the night. The purple bear is cute, by the way.

Night Flight is a pleasant adventure game that is packed with loads of action and thrill! Even though the game doesn’t really present much replay element, it is still exciting to be able to go out there and save yourself from claustrophobia. Well, at least for me, that’s exactly how I felt.

The game has an award-winning musical scoring that can easily beat Jumanji with its stimulating beat and effects. The sound effects deserve a five star. The composer deserves a standing ovation because even though the game seems tedious at times, the scoring will still keep you on the edge of your seat.

Another striking element of Night Flight are the impressive graphics and 3D animation because again, the fright is there. Even though I’m sure it’s not in Rebel Twins’ intention to scare the gamers, the darkness of the palette make it seems so—and effectively so. The effect when the explosions erupt is dope. I think that factor is enough to keep me attuned through all 32 choking levels of the game.

All in all, I’m giving Night Flight a well-deserved notch of four stars. It’s thrilling, it’s exciting, it gets boring, then it’s exciting again, it’s all in there. So yeah. 4 stars, it is.

I'm the weird cat in the attic. A non-conformist. A beatnik.

Become the Master of Your Universe with Scribblenauts Remix